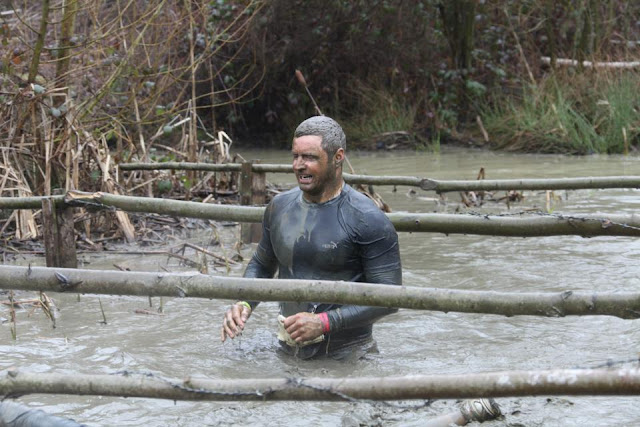 Last weekend saw the launch of a brand new obstacle course race in Surrey. Back 2 the Trenches, took place at the Priory Events site in Redhill, which is a location I have ran at before and can vouch for a great selection of terrain. Unfortunately I wasn't able to make it along myself but guest writer Chris Phillips was kind enough to step in at the last minute. Here's how he got on...

I was pleased to see that the weather was a little milder this weekend, as Back 2 the Trenches was largely a venture into the unknown me and I had no idea how cold and wet I would be getting. It was a last minute entrant and really all I knew was that it was billed as an obstacle race. So I made my way to the event with a degree of apprehension, but was reassured by the tag line that it was suitable for hardened men & women through to first timers. They wouldn't lie to us would they... surely?

On arrival, the car park gave an indication of how the ground was going to be - muddy and slippery. My immediate concern was how was I going to get the car out, not how was I going to stay on my feet, which maybe I should have given some more thought to!

As we got under-way on the course, we ran around the first corner and immediately hit a hill climb. It served the purpose of stretching the field out before the first obstacle - a 6ft railed fence. Right after that it was on to a hill slalom and a downhill slide. I wasn't sure how to tackle the slide, but opted for feet rather than head first! I think it was the best way to go, although I had to rearrange my shorts afterwards to restore a level of decency! 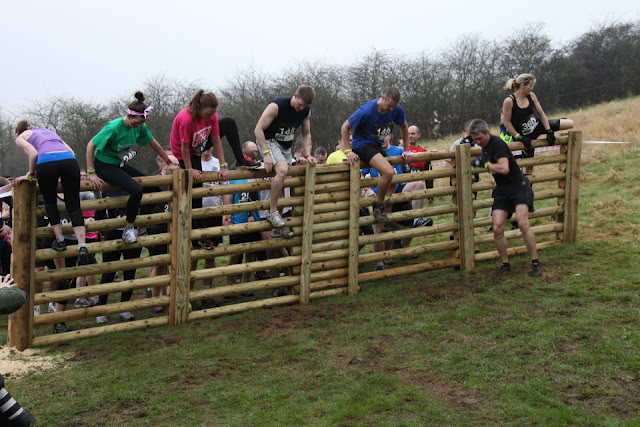 We then took a track through into a woodland section, all the while climbing up hill. What should have been a relatively easy climb became very challenging due to the slippery ground. Spikes or studs would have made the job a lot easier but as with most events, they weren't allowed. Looking around at the shoes that some people were wearing at the start line there would be a lot of people struggling in these conditions. I stacked it in the mud quite spectacularly, although I'd like to think I styled it out quite well! Again my thoughts were with some of those whose footwear wasn't really cut out for these conditions. 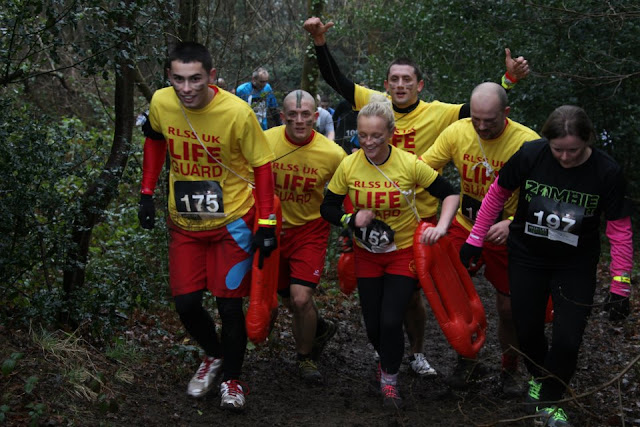 Having been up and down hills, over fences and clambering through trees, it was now time to get down and dirty by crawling through mud underneath barbed wire. Being well over 6ft, I always feel I'm at distinct disadvantage here, but I'm never one to moan so I pressed on!  I was on the two lap 10km version of the course, so by the time I crawled under the barbed wire for the second time, the mud had been nicely churned up and it was as much about avoiding the stones in the mud as it was about avoiding the barbed wire!  I only snagged my clothes on the barbed wire once, so I would class that as a relative success. I'd like to thank the eventual women's winner for helping to free me from the barbs, and saving me from flailing for eternity. 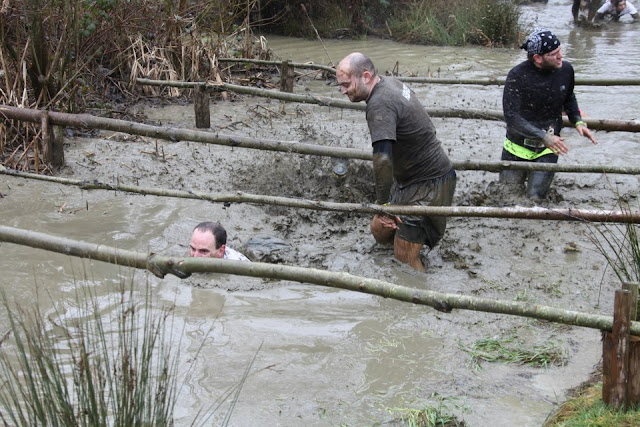 Just in case staying on your feet in the mud wasn't enough of a challenge, we were presented with the challenge of doing so whilst lugging a tyre around on a couple of occasions and a sand bag on another. Some of us already run carrying a spare tyre, so don't need the challenge of a further one!

At around the half way point of the circuit we faced a unique obstacle where we had to wind our way through a trench maze. Obviously the first time round I managed to find the longest route through, which is a mistake I was careful not to make on the second lap.

There was still time to discover my nemesis had found its way on to the circuit in the form of a vertical cargo net, requiring upper body strength and some degree of coordination and balance. This always presents a disproportionate challenge to me! In the spirit of perseverance, I managed to scale and tame it. 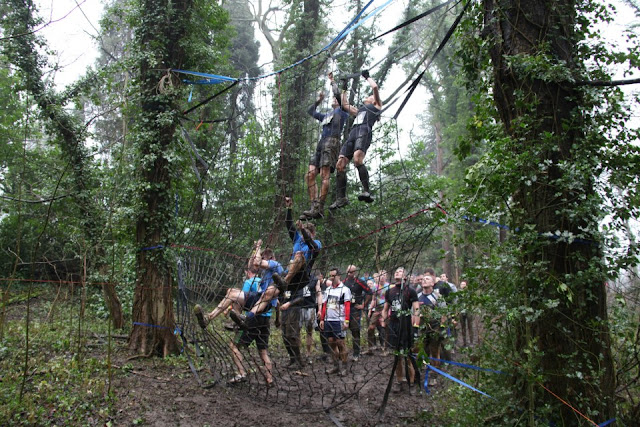 Obviously realising that some hills were so slippery that they would be insurmountable, the organisers were descent enough to provide ropes to assist, although by 2nd time around trying to find the rope in amongst the mud was almost as much of a challenge as getting up the hill!

Whenever it seemed like you'd stayed on your feet for long enough, there was a cargo net to crawl under so that you got down in the mud again. Back 2 The Trenches can definitely be classed as a pretty muddy affair.  It was great fun to do, despite coming out with cut hands & knees. It would be at this point my other half would raise her eyes to the ceiling and fail to see how this could be described as fun! It was definitely a nice break from the more 'straight forward' off road races I've been running lately. I don't know where I came but I guess that doesn't really matter, as this race certainly seemed to have more emphasis on the fun side of things. Especially with there being a 5k option, which most people would be able to get around and enjoy.

So there you have it, thanks loads to Chris for his report from the first ever Back 2 The Trenches. It sounds like a great event and certainly one that I will be checking out in the future.

Stay up to date with all of the mud run and obstacle course race news by following Mudstacle on Facebook and Twitter.