Tough Guy have recently announced a new addition to their selection of events - Tough Guy Mud Triathalon. - taking place on the weekend of 13th & 14th October 2012. 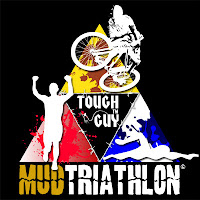 As always their communications about the event are a little confusing, but don't let that put you off, if it's anything like their other events it will be a slick and well-organised on the day.
There's a limited amount of information out there at the moment but from what I gather the event will follow a similar format to a standard triathlon but with a Tough Guy twist. The bike ride will be off road and muddy, so a decent all-mountain bike will be a must. The swim will be a circuit of a lake, with a few extra obstacles thrown in. Then the run will involve circuits of their legendary assault course.
The distances for the 2012 "Screwball" course are as follows:
15km off road bike
400m swim
10km Tough Guy (assault course) 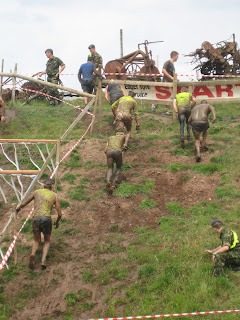 It doesn't relate totally to triathlon distances, but is closest to a triathlon sprint (20km bike ride, 750 swim and 5 km run). You can expect it to be a damn site tougher and more draining than that though! But if that doesn't sound tough enough, they hope to offer longer distances in 2013, depending on the success of the 2012 event. Here's what they've got in mind:
"Thunderball"
25km off road bike
1,000m swim
15km Tough Guy
"Super Bowl Ball"
40km off road bike
3,000m swim
Full original Tough Guy (19km)
They sound pretty mental to me! Definitely something to work towards though.
All in all, this is a great way to diversify in a crowded market. Good work Tough Guy, let's hope it's a success!
Check out the official Tough Guy Mud Triathlon page here.

How To Ring Traverse At Obstacle Races – With The Beard...