Although I've lived practically around the corner from Park Run in Wimbledon for the last couple of years, I only managed to get along to the event last weekend, a few days before moving out of town. And, to be honest, I'm pretty gutted I didn't get along their sooner! 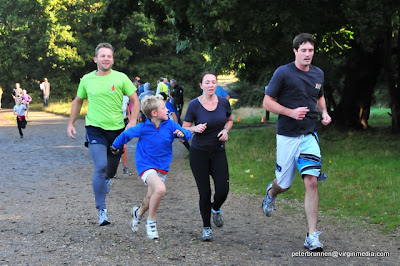 All is not lost though, I've discovered that Park Run operate at 147 locations all around the UK. So, wherever you are, there's bound to be an event within a short hop. For those living in ignorance, like I was until last weekend, Park Run is a totally free 5km event. It's measured with a wheel to be bang on the right distance and your time is recorded to the nearest second, so it's a great way of tracking and measuring your progress.

I got my act together last weekend after joining Tribesports, a sports social media network in which you join particular "challenges" that you want to achieve. I decided to set myself the challenge of running 5km in under 20 minutes, which of course made Park Run the perfect arena to take it on.

Although I run a lot, I normally do plenty of exercises along the way, so don't really keep track of straight run times. I've often wondered whether I could really break 20 mins and it was great to have an excuse to put myself to the test.


As I arrived at the Wimbledon Common shortly before 9am, a very large crowd had gathered. It really was a big deal and a regular fixture for a lot of people; a very broad selection of people at that. Ages ranged from 10 to 70. Some people were there with family and there were a fair few serious solo runners. There seemed to be a real community feel, with the event being run entirely by volunteers.

After a short intro from one of the organisers, the crowd of several hundred runners headed towards the start line. Being new to the event, I didn't feel like I could confidently jostle my way to the front of the pack, so settled for a position in the middle of the closely-packed scrum. Of course, when the start was sounded, I had to do a fair amount of jostling to get into a position where I could comfortably find my own pace. It really was mayhem for the first 500m and I felt I had to work extra hard to get back on track.


Being “Park Run”, the terrain was mostly footpaths, with gravel and earth under-foot. It had been a very wet week, so large puddles had formed and there was a fair amount of mud. I started to curse my decision to wear a regular pair of road running shoes, as I found myself slipping all over the place.

I didn't really know how to pace such a short blast of running, so I decided that I’d try to hit it as hard as I could from the beginning. After about 3km I really started to feel it and, although I tried to fool my mind into thinking everything was okay, there was no denying that my pace was starting to fall away. I had to fight battles with my motivation as a couple of runners overtook me. Damn that sucked, and I definitely felt I needed to work my pacing out next time around.


The last 500m were excruciating. As you can see in the picture above, I wasn’t in a good place. I’d been there many times before though and knew that everything would be okay as soon as I crossed the finish line, so just tried to hold on to that thought.

It might have taken 30 seconds of puffing and panting but I was right, everything was back to normal and feeling good on the other side of the line. So good that I got to wondering whether I could have pushed myself that little bit harder. I had missed out on my 20 minute target, all be it only by 40 seconds. Could I have broken into a sprint in the last kilometre? To be honest, I’m not sure if I could have done.

I had learnt a lot from the race and I knew how I’d do things differently in future. Making a regular fixture of Park Run would be something that I’d be really interested in doing. Once I’m settled in Bath, I’ll be out to find my nearest race, which I’m sure won’t be far away.

www.parkrun.org.uk
If you’re specifically interested in the Wimbledon event that I took part in, check out the sub-site here:

Thanks loads to Peter Brunnen for the photos!