If you're reading this article you may well have found it via Facebook, Twitter or maybe even Pinterest. The chances are you're perfectly satisfied with your social media of choice and don't really feel the need to sign up for yet another one. Well think again! If you're a sports and fitness lover, Tribesports is a new(ish) network that's ready to plug the gaps that you never knew existed in your online social life. 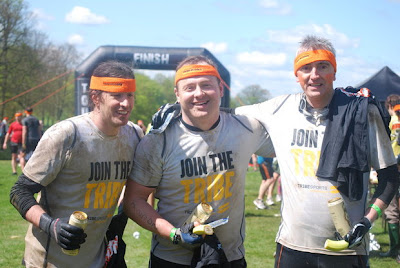 In recent years there have been many times when I thought social media pretty much had everything I needed covered. Back in the day, Myspace looked to be taking over the world and it seemed an impossibility that a new start-up could replace it. Then in stepped Facebook and completely crushed it within the blink of an eye. It did everything Myspace did and more and their more friends-only networking appealed to even the most  fearful privacy concious interwebers. In Facebook's world you generally had to know somebody in the flesh before connecting in cyberspace. Twitter and, more recently, Pinterest have proved that they have something to offer that isn't currently covered by Facebook's offering. I think that a large part of their appeal is their more open feel - it's networking outside of your friendship group.

Of course, for every successful social network, there are a few thousand unsuccessful ones! Every web developer and their dog seems to think that they can re-invent Facebook for one reason or another and, most of the time, Facebook just does it better. It must be agonising for the almighty Google, they've tried time and time again to take a chunk out of Facebook, most recently with Google+, but the world have voted with their mice. People have too much invested in Facebook now and, to be honest, Facebook just does the job better.

Anyway, I digress, I'm not going to bore you any more with my commentary on the history of social media. I have recently stumbled upon Tribesports - a social media specifically for those with an interest in personal fitness and sports. Sure, it has a certain Facebookness about it but there's a lot more besides, and it does warrant a place in your daily interbrowsing regime.

Setting up a profile is easy, as it should be, and requires that you add a profile picture, a short bit of blurb about yourself and list your sporting interests. The focus from that point onwards is mostly on fitness. You are invited to join "tribes" that interest you. Tribes are groups of people that share a similar interest as you. For example, I joined a "Get fit without joining a gym" tribe and a "Tough Mudder" tribe, amongst other things. On each of the tribe pages there are forum-style discussions and loads of articles, pictures and videos containing training hints and tips, as well as the experiences of other tribe members.

In the case of the Tough Mudder tribe, it's a great way of meeting people and forming a group to run with at the event. It fits in perfectly with Tough Mudder's ethos, that encourages teamwork and going around as a crew.

A big part of the day-to-day usage of the network revolves around "Challenges". There are loads listed that have already been set up and you can set your own challenges if you'd rather. I chose a selection to get myself started: "Run 5k in under 20 mins", "Get stretching" and "The 5-50 challenge". The stretching one consisted of completing seven specific stretches over the course of 11.5 minutes and the 5-50 involved doing 5 lots of 50 exercises. As soon as I excepted the challenges a selection of random people "encouraged" my activity, which is similar to a Facebook like I guess. It may sound a little odd but it was very encouraging to hear from people who were working on the same activity and gave the potential of communicating outside of your usual social or training group.

The 5km in under 20 minutes was a challenge that I've been wanting to take on for a long time. I haven't quite got there yet, but this is definitely giving me an incentive to work on it. (See this blog on the 5km Park Run). Even if you don't make the challenge on first attempt, you can use the challenge area to share your experiences and get hints and tips from others.

For those at the top of their game it would be worth looking at this week's bonus challenge "Chest Strength Circuit", involving a sequence of explosive clap push-ups, one-armed push ups and diamond push ups. It's certainly something I would have to work towards, but if your upper body is in shape why not give it a go. This is bad-ass:

So, as well as being a neat new social network, Tribesports incentivises your training and gives you the opportunity to freshen up your routine. With a massive selection of cross-fit style challenges, you'll be able to keep pushing yourself indefinitely.

I'm still new to Tribesports but so far I'm really liking the looks of it. If you'd like to connect with me on there, you can find me here.

How To Rope Traverse At Obstacle Races